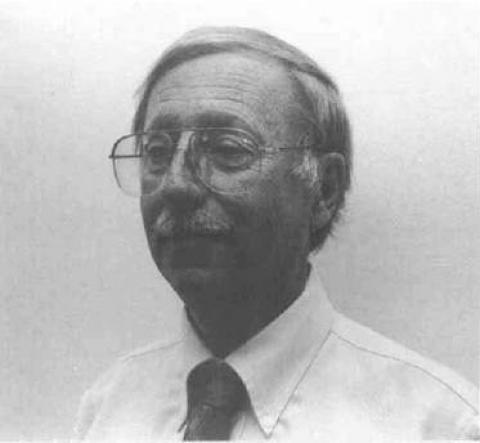 The William McAdams Outstanding Service Award is presented annually by the American Board of Health Physics (ABHP) to recognize and honor those individuals who have made significant contributions to the advancement of professionalism and health physics certification. This award is named for one of the "founding fathers" of the ABHP, William McAdams who, in 1958-59, exercised strong and dedicated efforts to identify the need for the ABHP, define the concept, organize the body, obtain the charter, and implement the initial certification program.

The award was first presented five years ago, on the 30th anniversary of the ABHP. The following individuals have been awarded the William McAdams Award in recognition of their contributions to certification and professionalism in health physics:

This year, we announce with pleasure the sixth recipient of the William McAdams Outstanding Service Award, Leroy F. Booth. For over 20 years now, Lee has been involved in the certification process and has made many contributions to the professional advancement of the field of health physics. From 1973 to 1975, as Director of the Baltimore-Washington Chapter Certification Exam Course, Lee helped develop the course content and direction. During the period from 1979 through 1983, Lee served on the Comprehensive Panel of Examiners where he served as Vice-Chair and Chair. IN 1984, he participated in the role delineation workshops designed to identify the CHP Domains of Practice and to ensure that the certification exam was a valid measure of health physicists' skills. Following this, Lee participated in establishment of the Part I Panel of Examiners. Lee was a director of the ABHP from 1988 through 1992, serving as the Secretary in 1989, and two years os Chairman of the Board. While on the Board and since, Lee has worked to develop a strong synergistic relationship between the Board and the Academy.

As a health physicist, Lee has made many contributions to health physics. Lee has authored numerous papers, presentations, and technical reports on various topics, including thermoluminescent dosimetry, whole body counting, microwave safety and contaminated site characterization studies. Lee served on the ANSI N343 Standards Committee from 1990 to 1993, and is Task Group Leader for the ASTM standard development committee for Performance of Field Measurements of Photon Spectra.

There can be but few persons within the field who have been more consistent and more productive in their devotion to advancement of the profession or more dedicated to the certification process. Hence, it is with great pride and appreciation that we recognize Leroy F. Booth, as this year's recipient of the William A. McAdams Outstanding Service Award.