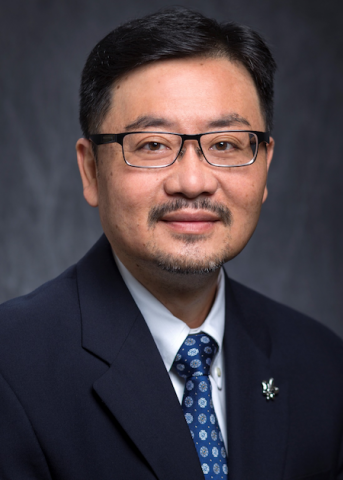 Dr. Wei-Hsung Wang is the recipient of the 2022 William A. McAdams Outstanding Service Award.  This award is presented annually by the American Board of Health Physics (ABHP) to honor a certified health physicist who has made significant contributions toward professionalism in health physics and to the certification process.  In conferring this award, the ABHP Selection Committee especially recognizes Dr. Wang’s commitment to the missions and objectives of the ABHP.  He served as a member of the Part II Panel of Examiners from 2008 to 2018, including serving as Vice Chair in 2015 and Chair in 2016, and the AAHP Professional Development Committee from 2009 to 2012.  He also chaired the HPS Academic Education Committee (2018-2021), served as Co-Academic Dean of the 2014 HPS Professional Development School on Radiation Safety in Medicine, and was President of the Deep South Chapter HPS for four years.  In addition, he has served on the Certified Laser Safety Officer Review Board.  Currently, he is a member of the ABHP through 2023, serving as Vice Chair in 2020 and Chair in 2021.

Dr. Wang is a professor at the Center for Energy Studies at Louisiana State University (LSU), an adjunct professor in the Department of Physics & Astronomy and the Department of Environmental Sciences at LSU, and a clinical professor of radiology at LSU Health Sciences Center New Orleans.  He was a faculty senator at LSU from 2019 to 2022.  He teaches Radiation Protection and Exposure Evaluation, Environmental Radiological Evaluation and Remediation, and Nuclear Facility Safety courses and has received Commendation for Excellence in Teaching five times at LSU.  He has chaired 11 graduate committees and served on another 22 graduate committees.  He is also Director of the Radiation Safety Office at LSU and administers a comprehensive radiological control program under a broad scope radioactive material license.

Dr. Wang received his B.S. degree in geology from National Taiwan University, M.S. degree in environmental health engineering from Northwestern University, and Ph.D. degree in health physics from Purdue University under the mentorship of Dr. Herman Cember and Dr. Paul L. Ziemer.  He is certified by the American Board of Health Physics (ABHP), the Board of Certified Safety Professionals, and the Board of Laser Safety.  He is a Fellow of the Health Physics Society (HPS) and was the Herman Cember Memorial Lecturer at the 2013 American Industrial Hygiene Conference and Exhibition in Montreal, Canada.

Dr. Wang’s research interests center on the development of feasible solutions to practical radiological protection, radiation detection, and environmental impact issues, through the application of a diverse background in bionucleonics, environmental health engineering, industrial hygiene, non-ionizing radiation, radiation instrumentation, and radiochemistry.  The majority of his work has emphasized operational radiation safety, radiation detection instrumentation, air monitoring methodology, radioactive waste management, gamma-ray spectroscopy, radiation dosimetry, environmental radiation, and radiological emergency response planning and preparedness.  He has contributed three book chapters and authored/co-authored more than 60 peer-reviewed publications, conference proceedings/presentations, and abstracts.  He also holds a U.S. patent on a real-time video radiation exposure monitoring system.  As a principal investigator/co-investigator, more than two million dollars of funds from grant proposals and contracts have been awarded to his collaborative research and teaching efforts in health physics.  In addition, he has served as a reviewer for Environmental Health Insights, Health Physics, Medical Physics, Nuclear Instruments and Methods in Physics Research, Nuclear Science and Techniques, and Progress in Nuclear Energy as well as the National Institute for Occupational Safety and Health SWCOEH Pilot Projects Research Training Program and the U.S. Civilian Research and Development Foundation.

Dr. Wang is a charter member of the U.S. Environmental Protection Agency (EPA) Science Advisory Board (SAB) and its Radiation Advisory Committee (RAC).  He also served on the EPA SAB RAC augmented MARSSIM (revision 2) Review Panel.  He was a technical advisor to the Secretary of the Louisiana Department of Health to provide the Secretary with scientific advice on planning, preparedness, and response to radiological events.  Dr. Wang was selected to participate in the 2016 Nuclear Tour de France (organized by Française de l'American Nuclear Society and Société Française d'Energie Nucléaire and sponsored by ANDRA, AREVA, Électricité de France, and Commissariat à l'Energie Atomique) to promote and develop exchanges about the status and knowledge of nuclear development and achievements in France and in the U.S. in different technical fields.  After the Fukushima nuclear incident in Japan, he served as a radiological expert on the U.S. National Oceanic and Atmospheric Administration Radiological Ideas Workshop.  He was also an invited panelist on the U.S. Nuclear Regulatory Commission (NRC) Radiation Protection Standards Workshop to discuss the potential changes to the NRC’s radiation protection regulations and guidance in light of recommendations in ICRP Publication 103.

On behalf of the ABHP, it is my privilege to recognize my colleague, Dr. Wei-Hsung Wang, for his many years of dedication and sustained service to the ABHP and the health physics profession in general.  Congratulations, Wei-Hsung, on receiving the 2022 William A. McAdams Outstanding Service Award.