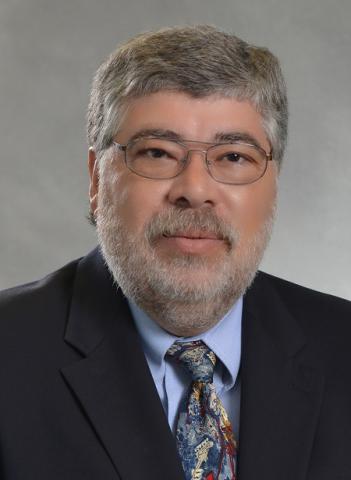 For sustained and outstanding services to the American Board of Health Physics (ABHP) and the American Academy of Health Physics (AAHP), Kent Lambert is awarded the William A. McAdams Outstanding Service Award for 2013. The award was established in 1989 and is presented annually by the ABHP and AAHP to honor a certified health physicist who has made a significant contribution toward the advancement of professionalism in health physics and to the certification process.

In conferring the award, the committee noted Kent's dedication to the profession of health physics for 34 years, serving as board member to the HPS and ABHP, as ABHP Board Chair, and as Panel Chair for ABHP Exam Part I. Currently Kent is implementing solid radiation safety programs at several academic and medical institutions. He continues to provide his service to various committees both inside and outside the Health Physics Society and provides mentoring to new health physicists. Kent has a keen intellect that provides a critical review to radiation safety practices and policies. He never hesitates to stand up for his beliefs and treats those with whom he associates with the utmost professional respect.

Kent received his certification in 1990. Beginning in 1999, his service to the ABHP began, and he has ever since contributed to the certification process in one capacity or another. He served as a Part I Panel member from 1999 to 2003, chairing the panel in 2002. During his term as past-chair, he ran a passing point workshop and then critically evaluated the methodology used. This set in motion an overhaul in the method of setting the Part I passing point.

He was elected to the ABHP Board in 2007 and served as vice-chair, parliamentarian (two terms), and chair. During his terms as parliamentarian, he completed a comprehensive review of the policy and procedure manuals and offered major revisions to each. While chairing the Board, Kent made substantive changes to the application forms, allowing them to be completed electronically. He also performed much of the Part II exam data analysis and report preparation.

Even after ending his official capacity on the ABHP, he helps get the Part I exam started and has assisted the new Chair. Kent even volunteered for the dreaded task of grading Part II exams. Currently, he is the co-Chair for the International Radiation Protection Association (IRPA) working group on certification programs tasked with preparing guidance documents to assist IRPA associate societies in developing certification programs in their countries.

Kent's volunteer activities have not been restricted to the ABHP. Kent became a Fellow Member of the Health Physics Society in 2010 and served on its Board of Directors from 1998-2001, as HPS Treasurer from 2002-2004, as parliamentarian from 2009-2011, and on numerous committees. At the local level, Kent has served as president for the Delaware Valley Society for Radiation Safety on two separate occasions.

Kent holds a Master of Science degree in Radiation Sciences from Rutgers University and a Bachelors of Science Degree in Radiation Protection Engineering from Texas A&M. Kent is currently the Director of Radiation Safety and Radiation Safety Officer at Drexel University and is responsible for the radiation safety programs at Drexel University, St. Christopher's Hospital for Children, and Shriners Hospitals for Children Philadelphia. For many years, he was the consulting radiation safety officer for Hahnemann University Hospital, the Medical College of Pennsylvania, and Cancer Treatment Centers of America in Philadelphia, and provided consulting health physics services to five Tenet hospitals in Philadelphia. Previously Kent worked at Temple and Princeton universities.

His many years of sustained and dedicated service to the ABHP and the health physics community at large make him fully deserving of recognition and applause. With this award, Kent joins an elite group of 24 previous recipients. It is with great pleasure that I present the William A. McAdams Outstanding Service Award for 2013 to Kent Lambert.