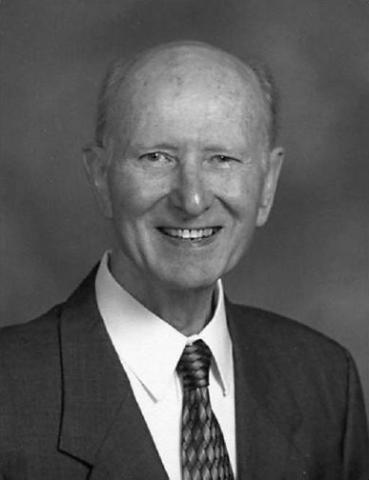 Here at this 50th Anniversary meeting of the Health Physics Society, we have been looking back and celebrating the origins of our society. We celebrate the first meeting, the creation of our professional journal, and the first steps to the establishment of the certifying body, the American Board of Health Physics. In our profession, we all owe a debt of gratitude to the founders who had a vision for the unique field of Health Physics. The early history of the Board mentions two names prominently: Elda Anderson, in whose name the HPS annually honors a young health physicist, and William McAdams.

In 1989, the American Board of Health Physics established an award for outstanding service to the Board and to the professionalism of the practice of Health Physics in the name of William McAdams. Sixteen Certified Health Physicists have been honored with the award. Today, I am pleased to announce that the seventeenth recipient of the William A. McAdams award is Dr. Dade Moeller.

Dr. Moeller was born and reared in rural Florida where he grew up on a farm as a child of the Depression. Upon graduating from high school in 1944 at age 17 (and with World War II underway), he enlisted in the US Navy and reported for active duty one month later. Seeing something special, the Navy sent him to school instead of to war. Had it not been for the war and the Navy, he might not have had an opportunity to attend college. His undergraduate career included studies at seven different schools and took an interesting turn. Because Dade desired to obtain a degree from Georgia Tech, he developed a plan to get admitted to the university. He learned that Georgia Tech would only allow a limited number of transfers from specific programs. At the University of South Carolina at the time, Dade found out that one student per year was allowed to transfer to Georgia Tech from Howard University in Birmingham. So off to Birmingham he went. Dade eventually transferred from Howard, which was a seminary school, to Georgia Tech and as Dade tells it, he was just one course short of completing his divinity degree and becoming a minister. After all of the transfers, Dade received a BS in Civil Engineering and a Masters in Sanitary (Environmental) Engineering from Georgia Tech in 1948.

Dade then began his first job as a commissioned officer in the US Public Health Service (USPHS). While in the USPHS, he earned his doctorate in Nuclear Engineering from North Carolina State in 1957. During his 18 years in the USPHS, he was stationed in 10 different cities. His duty stations included the Oak Ridge and Los Alamos National Laboratories, the headquarters offices of the Public Health Service in Washington, DC, the Robert A Taft Sanitary Engineering Center in Cincinnati, where he served as Director of Radiological Health Training, and the Northeastern Radiological Health Laboratory in Winchester, Massachusetts, where he served as Officer in Charge. In 1966, he retired from the USPHS and joined the Harvard School of Public Health as an Associate Professor. As Dade will tell you, he joined Harvard because they asked. His final position at the school was Dean of Continuing Education. He was also awarded an honorary degree by the university.

Counting his time in the Public Health Service as one job, and his subsequent appointment to the faculty of Harvard University as his second, he had only two employers prior to his "official" retirement in 1993. Dade is currently Professor Emeritus at the Harvard University School of Public Health. He remains active in our profession and serves President Emeritus and Chairman of the Board of Dade Moeller & Associates.

Dr. Moeller was the first new member added to the initial ABHP Panel of Examiners with his term starting in the Panel's third year in 1962. He served on the Panel through 1965, and in his final year served as the Chair of the Panel of Examiners. He was named a member of the American Board of Health Physics the following year in 1966. He then served four years, from 1967-1970 as the Chair of the ABHP. His term of service remains the longest period of service as Chair in the history of the ABHP. This was also a period of great change as 1968 was the first year of the separate fundamental exam now known as the Part I exam. Dade also published an extensive analysis of the characteristics of applicants to be certified in the Health Physics Journal in May 1971. I should point out that Dade's mentoring was prominently mentioned in the citation of last year's recipient of the McAdams award.

Dr. Moeller was a member of the Advisory Committee on Reactor Safeguards and chaired the Advisory Committee on Nuclear Waste. He was on a subcommittee for BEIR-I (Committee on Biological Effects of Ionizing Radiation), and was a member of the BEIR-III Committee. He represented the US on Committee 4 of the International Commission on Radiological Protection, served as a consultant to the World Health Organization, and was elected an honorary member of the National Council on Radiation Protection and Measurements. One of his most recent activities (2002 - 2005) was to serve as chairman of the Science and Technology Review Panel, Office of Civilian Radioactive Waste Management, U.S. Department of Energy.

A more detailed biography of Dr. Moeller was published in the Journal of the Health Physics Society in December 2003 honoring him as the recipient of the Robley D. Evans Medal. I would encourage all of you to look up the Evans' Medal Citation for more detail into his long career and accomplishments.

These accomplishments are even more impressive considering his lengthy publication list. Dr. Moeller's curriculum vitae runs 32 pages long with 237 specific publications as of June 2005, with over 30 since his retirement.

I would also be remiss in mentioning his accomplishments if I did not also mention his five children and sixteen grandchildren, and his service as an elder in the First Presbyterian Church of New Bern, NC.

To his extraordinary list of honors, it is my privilege and pleasure on behalf of the American Board of Health Physics to present the William A. McAdams outstanding service award to Dr. Dade Moeller.