Presented to GEORGE J. VARGO, JR. by the American Board of Health Physics at the 46th Annual Meeting of the Health Physics Society, Cleveland, Ohio, June 10-14, 2001 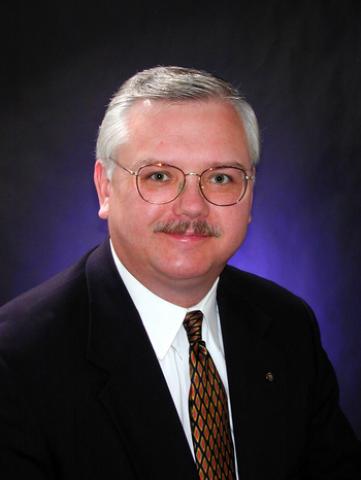 The American Board of Health Physics is proud to present the William A. McAdams Outstanding Service Award to George J. Vargo, Jr. This award is given annually to a certified health physicist who has made significant contributions towards the advancement of professionalism in health physics and to the health physics certification process. The strength of the profession and the certification process relies on the leadership and dedication of the people who serve the Board, the Examination Panels, the American Academy of Health Physics, and the Health Physics Society.

George's service to the profession of health physics has been impressive. He has served terms of office in the Western New York and Columbia Chapters, as well as on the Membership, Manpower and Professional Education, and International Relations Committees of the Health Physics Society. George is currently an Associate Editor and Software Editor for the Health Physics Journal and has written numerous book reviews. George has been selected as an official delegate to the IRPA Congresses in Montreal, Vienna, and Hiroshima. He was awarded the title of Fellow of the Society for Radiological Protection in 1998 and Fellow of the Institute of Physics in 2000.

George was certified by the American Board of Health Physics in comprehensive practice in 1984 and in the power reactor specialty in 1986. In 1989, George was granted the Certificate of Competence in Applied Health Physics by the Society for Radiological Protection in the United Kingdom.

George has been active in the ABHP's examination process for fourteen years. He participated on the Power Reactor Certification Examination Panel as a member, Vice Chair, and Chair. This was followed by a 5-year term on the American Board of Health Physics, during which time George served as Board Member, Parliamentarian, Secretary, Vice Chair, and finally as Chair in 1998.

George serves as the ABHP delegate to the Council of Engineering and Scientific Specialty Boards and was instrumental in the preparation and submission of the Board's application for accreditation with the CESB. Accreditation was granted to the ABHP earlier this year.

George developed an interest in health physics during his high school days while working on a science fair project. His project examined the structure of crystals, and George wanted to make measurements of crystal lattice size using x-ray diffraction. In order to obtain the needed measurements, George was referred to the Physics Department at Duquesne University in Pittsburgh, where several faculty members offered to assist him. Before George could use the equipment, however, he was required to complete a detailed radiation safety indoctrination on the potential hazards of the x-ray diffraction equipment and receive permission from the University's Radiation Safety Officer.

During the afternoons he spent around the Physics Department at Duquesne, George had the opportunity to meet Dr. Allen Brodsky, who had recently established an undergraduate program in radiological health. George was intrigued by the broad scope of the radiological health curriculum. He took classes at Duquesne during his senior year of high school, and enrolled in the radiological health program as soon as he was eligible following his high school graduation. After graduating from Duquesne with a B.S. degree in radiological health, George joined the staff of Radiation Service Organization in Laurel, Maryland, in 1978 as the Radiation Safety Officer. The following year, he headed north to the New York Power Authority's FitzPatrick Plant to pursue a career in power reactor health physics.

While at FitzPatrick, George became interested in innovative source term reduction strategies to reduce the relatively high collective dose at the plant. George convinced senior management to invest in chemical decontamination of the reactor coolant system, which resulted in savings of over 700 person-rem and established a world record decontamination factor for a dilute reagent chemical decontamination. He also participated in and coordinated other source term reduction activities including hydrogen water chemistry, feedwater zinc addition and cobalt reduction programs. To achieve a better understanding of the contribution of various nuclear power plant radiation sources to worker dose, George developed a passive directional radiation probe using an array of TLDs. In 1992, he was granted a United States patent for this invention.

Along the way, George completed a Master of Science degree in Health Physics from Georgia Institute of Technology and a Ph.D. in applied physics from Columbia Pacific University. George stayed involved in education as an adjunct associate professor of nuclear engineering and engineering physics at Rensselaer Polytechnic Institute. At RPI, he supervised a number of senior projects for undergraduate students in the radiological engineering option and served on committees for several M.S. students. Despite the great distance from Richland, he still remains active at RPI and returns to New York to teach classes and give seminars.

In 1991, George left New York Power Authority and joined Battelle at the Pacific Northwest National Laboratory as a Staff Scientist. George was invited to join the DOE's International Nuclear Safety Program, where he assumed a lead role in projects to develop a nuclear and radiation safety regulatory infrastructure in the Russian Federation and to improve emergency preparedness. This program has required George to spend significant amounts of time in the Ukraine, as well as many other countries of the former Soviet Union.

George managed the Chernobyl Dose Reduction Project, whose goal was to transfer and upgrade health physics technology at the Chernobyl Shelter. George also recently edited a book on the Chernobyl accident. The book, titled The Chernobyl Accident: A Comprehensive Risk Assessment, originated from a compilation of Ukrainian technical papers, and included assessments of the risks posed by the shelter and damaged reactor, waste management, environmental impacts, and medical effects.

Somehow, in addition to this impressive list of professional activities, George finds time to engage in such hobbies as photography, amateur radio, and model rocketry. He also has been active in organizing the Tri-Cities' annual Tumbleweed Music Festival.

Today, the American Board of Health Physics and American Academy of Health Physics would like to recognize George for his leadership and accomplishments in the field of health physics and in the certification process. I take great pride and privilege in presenting the 2001 William A. McAdams Outstanding Service Award to George J. Vargo, Jr.