Presented to JAMES E. TURNER by the American Board of Health Physics at the 45th Annual Meeting of the Health Physics Society, Denver, Colorado, June 25-29, 2000 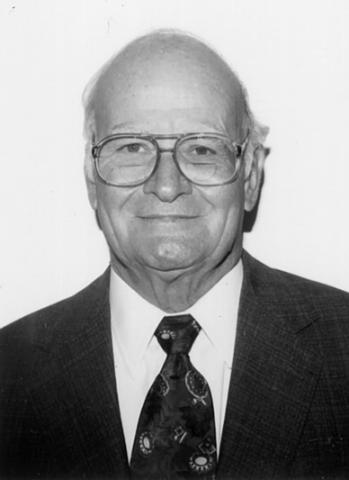 Jim became certified in 1966. He served on the Comprehensive Certification Panel of Examiners from 1987 to 1992 and he was elected President of the American Academy of Health Physics for 1993. Jim's service on the Panel is recalled as superb. He was one of the Panel's most knowledgeable and helpful members. He was a prolific contributor to the question pool and the source of guidance for many panel members. He was a real gentleman who never made you feel that he was your technical superior, but certainly was and every one on the Panel knew it. During his tenure as president-elect and president of the AAHP, he led the effort to develop a draft Vision Statement for the AAHP. This Vision Statement was published in the December 1992 HP Newsletter and formed the basis for the development of the AAHP Long Range Strategic Plan. Jim also facilitated the transition of the ABHP from a separate corporation into an arm of the AAHP. During this period the AAHP approved the ABHP Policy Manual and gained responsibility for the funds formally held by the ABHP.

Jim has been associated with the radiation protection field from nearly the beginning of his career. He received an A.B. in physics from Emory University in 1951. He continued his education with an M.S. in industrial hygiene from Harvard University in 1953. He studied at the University of Gottingen, Germany, for one year as a Fulbright-Scholar (1953-1954). Finally, he earned his Ph.D. in Physics from Vanderbilt University in 1956.

Jim's first job was as a teacher at Yale University from 1956 to 1958. The official title was Instructor of Physics. He then moved to working with the Atomic Energy Commission in Headquarters from 1958 to 1962 as a radiological physicist. In 1962, he moved to Oak Ridge National Laboratory (ORNL), where he subsequently held a number of positions, starting in the old Health Physics Division. He became Associate Division Director from 1974-1977, before returning full-time into research. He was named a Corporate Research Fellow at ORNL in 1988. He retired from ORNL four years ago.

Jim has served as a researcher in the field of interaction of radiation with matter, early physical/chemical events in irradiated liquid water, atomic and molecular interactions, and interaction of metal ions with nucleic acids and proteins (chemical dosimetry). Jim and his family spent a year during 1969 and 1970 at CERN in Geneva, Switzerland. There, as a visiting scientist, he carried out research on the use of negative pions for radiotherapy. He was a World Health Organization Consultant for two months, teaching health physics at the Bhabha Atomic Research Centre in Bombay, India, in 1967 and again in 1973. In 1978 and 1979, he was a consultant to the Institute of Nuclear Energy, Sao Paulo, Brazil. During his employment days and since retirement, he has also spent extended periods as a visiting scientist at the GSF-Institut fur Strahlenschutz, Neuherberg, Germany. As a result of all his research and teaching activities, Jim has been the author/co-author of over 250 open literature publications in the area of radiation physics and dosimetry and the chemical toxicity of metal ions. He has written or co-authored three textbooks on radiation physics and health physics, one of which is recommended reading for candidates preparing to take the Certification Exam (Atoms, Radiation and Radiation Protection, Turner, J. E., New York: Wiley-Interscience, 1995). Jim was also K. Z. Morgan's co-editor of Principles of Radiation Protection.

As stated earlier, Jim's first job was as a teacher. In reality, he never quit teaching. He just changed where and how he did it. Many students across the country perhaps know him from his textbooks, review articles, or PEP courses given over the years at the HPS annual meetings. For those fortunate enough to live in East Tennessee, you may have actually had the privilege of being in a class taught by Jim in the University of Tennessee Evening School, where he is still an adjunct professor in the Department of Nuclear Engineering. This past semester he taught a graduate course, Contemporary Health Physics, Preparation for the ABHP Part II Exam.

Because communicating the principles of radiation protection, radiation detection, and health physics is so important to Jim, he made a significant contribution in the area of the published word. Jim was one of the editors of the Health Physics Journal from 1974 to 1979. He was an Associate Editor of Radiation Research from 1980 to 1983 and again from 1991 to 1995. He is presently on the Editorial Boards of two other journals: Radiation Measurements and Radiation and Environmental Biophysics. Despite Jim's brilliance and notoriety, Jim has remained a down-to-earth and approachable individual.

Finally, in his spare time, for 45 years Jim has been the husband of Renate Turner, whom he met when he was a Fulbright student in Germany. They have three children.

Today, the American Board of Health Physics would like to recognize his many distinctive accomplishments and contributions to the certification process. I take great pride and privilege in presenting the 2000 William A. McAdams Outstanding Service Award to James E. Turner.