Presented to RICHARD R. BOWERS by the American Board of Health Physics at the 36th Annual Meeting of the Health Physics Society, Washington, DC, July 21-26, 1991 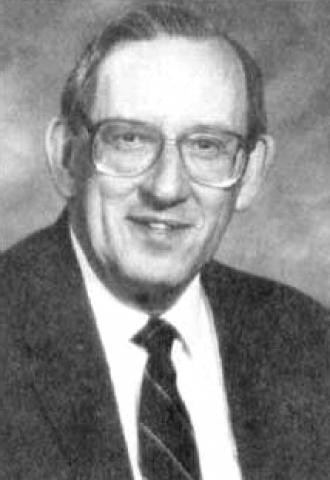 Shortly after its organization, the Health Physics Society established a committee to study the need for certification of health physicists and to develop plans for certification, if this appeared to be desirable. The Certification Committee membership included an energetic and farsighted young man by the name of William McAdams. After an intensive study, the Committee recommended that an American Board of Health Physics (ABHP) be established to develop standards and procedures, to examine candidates, and to issue written proof of certification to individuals who satisfied the requirements established by the ABHP. The Board of Directors of the Society decided that these recommendations had merit and appointed a temporary ABHP on November 8, 1958. The Chairman of the temporary ABHP was none other than William McAdams.

The temporary ABHP developed a set of minimum requirements for certification. At the Annual Meeting of the Society in June 1959, these matters were discussed in an open meeting and there was general support for the plan. The Board of Directors of the Society formally established the ABHP by approving an amendment to the bylaws of the Society in October 1959. William McAdams was appointed Chairman, and under his leadership, the ABHP worked diligently to become incorporated in New York State in December 1960, allowing the ABHP to achieve its independent identity.

Two years ago, on the 30th anniversary of the ABHP, we recognized two of the pioneers who contributed substantially to our formation and early development - William McAdams, as the first Chairman of the ABHP, and Jack Healy as the inaugural winner of the William McAdams Outstanding Service Award to annual recognize those individuals who have made significant contributions to the advancement of professionalism and the health physics certification. This award is named for the person who exercised strong and dedicated efforts to identify the need, define the concept, organize the body, obtain the charter, and implement the initial certification program.

Last year we recognized H. Wade Patterson, an emeritus CHP who was involved with the certification process for more than a decade. It was during Wade's tenure that the Board advocated the formation of the National Registry of Radiation Protection Technologists (NRRPT), the abandonment of the oral exam as an option to the certification process, and the development of a method whereby each voce would be counted equally.

This year it is our pleasure to announce the third recipient of the William McAdams Outstanding Service Award, Richard R. Bowers. Dick was involved with the certification process for nearly two decades, serving two terms on the Comprehensive Panel of Examiners from 1972 through 1978 and chairing that Panel in 1978; setting up and chairing the Power Reactor Specialty Panel from 1979 through 1981; serving on the ABHP from 1986 through 1990; and setting up and chairing the Part I Panel from 1988 through 1990. In all of his ABHP-related activities, Dick has been very generous with his time, and more importantly, with his ideas and wisdom. His contributions to the development and refinement of the certification process, as well as the ongoing conduct of the program, are numerous and substantial.

Dick is the type of CHP that the McAdams Award was meant to recognize. He was a key player in establishing the Power Reactor Specialty Certification, a program that has been instrumental in elevating the professionalism in the power reactor health physics community. Most recently his efforts to upgrade the Part I exam by using a computer model to help assure a consistently performing exam, and a question data base to track the performance of each question over a period of many years, have resulted in significant improvements in the quality of the Part I examination. Hence it is fitting that we should recognize Dick Bowers as the third recipient of the William McAdams Outstanding Service Award.