1. Disks or foils of copper, cadmium, or aluminum are often incorporated into thermoluminescent dosimeters (TLDs) in order to:

3. According to ANSI Z136.1 "For the Safe Use of Lasers", what Class applies to a laser which emits light in the visible portion of the spectrum such that eye protection is normally afforded by the aversion response including the blink reflex?

4. The maximum dose rate permitted at any point on the external surface of a package of radioactive material offered for transport in other than a sole-use transport vehicle is:

5. Right-angle scattered x-ray radiation exposure measured one meter from the beam of a fluoroscope will be:

6. Most of the documented harmful biological effects in humans from microwave radiation are attributed to hyperthermia. These include damage mainly to the eyes and:

7. If an airborne release occurs because of a loss of coolant accident at a light water power reactor in which fuel damage but no core melt occurs, the first radioisotope of concern through the food chain is:

8. When air is sampled by being pulled through a filter paper, the radioactivity at equilibrium on the filter paper due to naturally occurring radon daughters is:

9. The biologically most significant type of interaction of thermal neutrons with atoms in tissue is:

10. All of the following are common causes of significant radiation exposure in the use of x-ray diffraction equipment except:

1. alteration or removal of shielding in order to perform a specialized analysis.
2. visual alignment of the beam without using a leaded glass shield.
3. placement of fingers in the primary beam while changing samples.
4. failure to incorporate shielding in the walls of the room in which the unit is housed.
5. failure to realize that x-ray beams are emitted from exit ports other than the one of immediate concern.

11. To avoid criticality when processing waste fissionable material, the size and shape of the container and the concentration are most important for:

12. A solution contaminated with plutonium has spilled on the ground near a facility. There are no other radioactive materials in the solution. Which one of the following is the most appropriate primary survey instrument to assess the extent of the contamination?

14. When uranium hexafluoride is released to the atmosphere, hydrolysis results in the production of hydrofluoric acid and uranyl fluoride. The primary health hazard associated with such a release is:

15. In branching decay, a substance may decay by two or more modes. If there were only two modes of decay, the formula for the half-life would be:

16. An investigator has received some 95Zr (half-life = 65 days) for use in a long-term study. He finds the zirconium to be contaminated with 60Co (half-life = 5.24 years) such that the ratio of 60Co activity to the 95Zr activity is 0.012. After the initial assay, the activities of the two emitters will become equal in:

17. The count rate for an effluent particulate filter is measured in a proportional counter. Which of the following system calibration parameters is most crucial in converting the result to an activity for use in airborne concentration assessment?

18. For a narrow beam of photons, the relaxation length is that thickness of absorber that will reduce the photon intensity to ­­­­__________ of its original intensity.

19. In a satisfactory "air-walled" ionization chamber the ionization per cubic centimeter would be:

21. Which diagram of atmospheric conditions would result in lofting following release from the indicated stack? Note: Dashed lines represents the adiabatic lapse rate and the solid line represents current conditions. 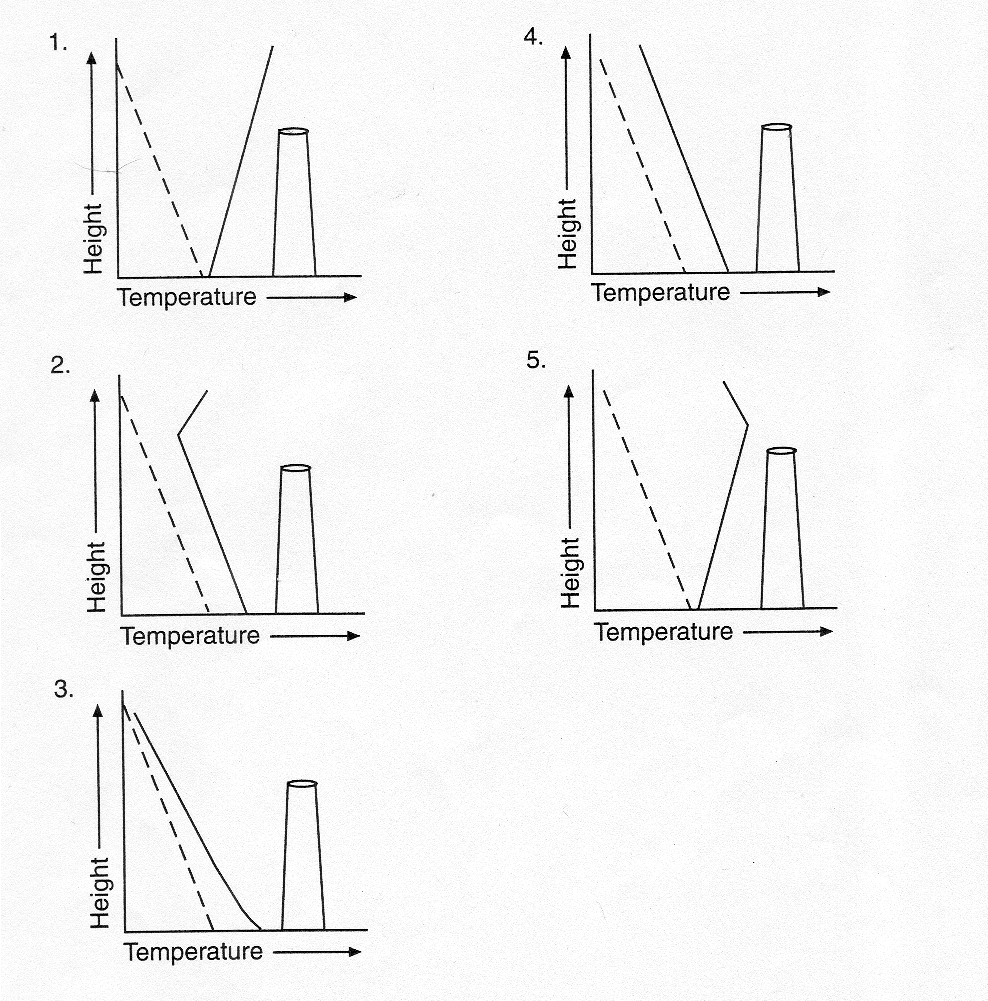 22. An air sample is counted for 10,000 counts. What is the relative probable error in percent?

23. A school district draws its drinking water from an aquifer that contains quantities of Ra-226 requiring pre-treatment. The water is passed through an ion-exchange resin prior to distribution. Which of the following best defines the Ra-226 loaded resin?

24. The figure shows five traces labeled A through E for a fixed filter Constant Air Monitor. Each represents a physically possible combination of a fixed or varying concentration of a single nuclide collected on the filter, with negligible self-absorption. The CAM trace starts at a background level, increases as the airborne activity is collected, and then continues after all activity in the sampled air is gone. 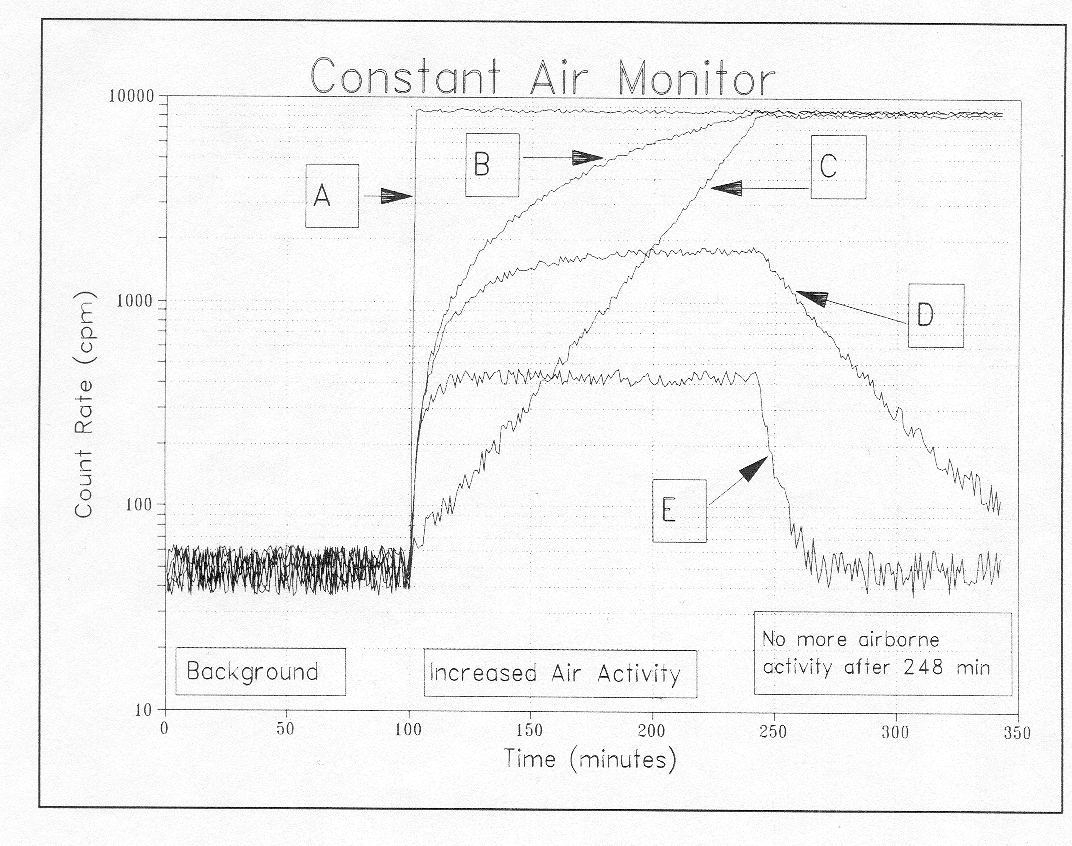 Which trace most likely represents a nuclide with a half-life of about 20 minutes?

25. What is the appropriate location for a declared pregnant fluoroscopist to wear an assigned fetal badge?