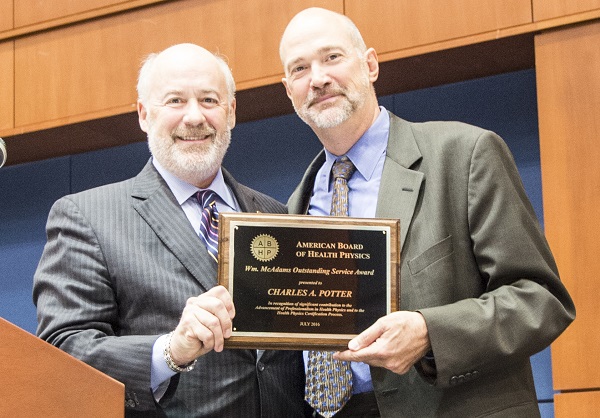 In 1994 at the HPS meeting in San Francisco, I presented a poster. The poster session, then as is now, was at the same time as Part I of the ABHP exam was given. I put up the poster and left a note that I was taking the exam, and when I got back to the poster had at least one note giving me good wishes. Since I wasn't eligible for Part II for three more years, I'm not sure why I took the exam so early - maybe so that I wouldn't forget material I had learned in grad school and in that way could minimize studying.

In 1997 at the HPS meeting in San Antonio, I took Part II. I took advantage of my company's compressed work week that gave me alternate Fridays off and accumulated vacation to study every Friday and Saturday from the end of January through June. I remember working through the exam until there was about 15 minutes left to the point where I was mentally exhausted. I walked out and met a good friend of mine where we asked each other how we did. He thought he did alright, while I just wasn't sure if I passed or not. It turns out that I survived what until recently, thanks to Glenn Sturchio, was the second lowest passing rate of the Part II exam. My friend became certified the following year.

There are few things which through my life and career that I've worked harder for and remember the details better than my quest for certification in health physics. I remember what I studied, where I studied, and who was with me when I studied. I remember the bar that I went to right after I took the Part II exam and some of the people who were there. I even remember, although that memory is somewhat hazier, some of the material that was on the exam. I've carried success in a low-passing-rate year somewhat as a badge of honor and my certification as an important career accomplishment.

Of course, my accomplishments are not due to me alone. I couldn't be as successful in any part of my career without the strong basis I received in my undergraduate and graduate education and the support of my family, especially including my wife Michelle, a health physicist by training who I met at the University of Massachusetts Lowell where we both were in graduate school, and who is with me here today.

Not too long after I was certified, I started lobbying to be a part of one of the exam panels. I achieved success in 2004 when Drew Thatcher named me to the Part II panel. In 2006 my good friend Govind Rao convinced me to be Vice Chair. This began two years of the grueling process of question preparation, exam preparation, grading, and processing of the grades that is the Part II exam process. This was greatly assisted by Govind, Vice Chair Pat LaFrate, and of course Nancy Johnson who kept everything going. I remained on the Panel until 2011 when I began my five-year term, of which I'm now in my seventh year, on the American Board of Health Physics.

I'm sure you're wondering at this point why I'm telling you all this. It's really for a couple of reasons. The first is that by being involved with a body such as this for such a long time, I've had the opportunity to collaborate with some fantastic people who work incredibly hard and really care about certification. I've named a few already and there are many more whom I've served and am still serving with in certification work and otherwise.

The second reason is that as I remember the journey from where I was to where I am now, I think of the great experiences I've had in the accomplishments that I've seen over time with the Part II panel and the Board. I can think of few things as rewarding professionally as participating with a group of volunteers who truly care and are willing to work as hard as they can on their own time to evaluate and improve the state of the body on which they are serving. And I know that as I rotate off the board, finally completing this seventh year of a five-year term, that those following behind will continue in our ongoing efforts. I'd like to thank Andy Miller, Bill Rhodes, and Jay Tarzia for the nomination and all those with whom I've served, whether on the Board or the Part II panel for this honor. As I leave the board and move to the academy to which I've recently been elected, I look forward to continuing to serve.