Presented to HERMAN CEMBER by the American Board of Health Physics at the 48th Annual Meeting of the Health Physics Society, San Diego, California, July 20-24, 2003 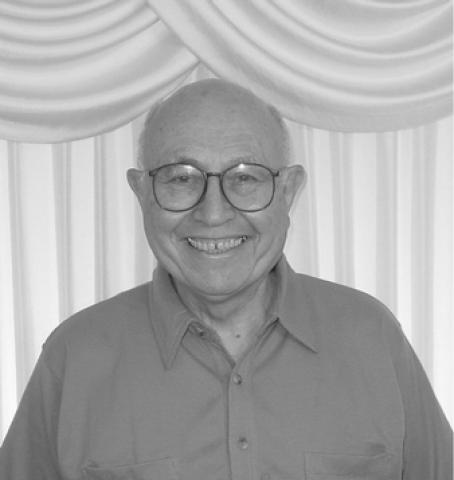 Dr. Herman Cember is the recipient of the 2003 William McAdams Outstanding Service Award. This award is presented annually by the American Board of Health Physics (ABHP) and the American Academy of Health Physics (AAHP) to honor a certified health physicist who has made a significant contribution toward the advancement of professionalism in health physics and to the certification process. In conferring this award, the nominating committee especially recognizes the service of Dr. Cember on the ABHP Panel of Examiners, service as Past President of the AAHP, and his continuing involvement in providing health physics expertise, education and training via his publications-as well as summer school and associated PEP course teachings.

Herman has been a scientific contributor to various aspects of the health physics field for over forty years. He received his BS degree in electrical engineering from City College of New York and his MS and Ph.D. degrees in biophysics from the University of Pittsburgh. He has extensive experience in radiogenic lung cancer and heavy metal toxicology. As a radiological health and safety specialist, he has been active in education, research, and applied areas of the field. His scientific achievements have resulted in the Distinguished Scientific Achievement Award, from the Health Physics Society in 1990, to recognize his research associated with lung cancer.

Herman had been assistant professor, then associate professor, of Industrial Hygiene at the University of Pittsburgh Graduate School of Public Health from 1951 to 1960. He then went to the University of Cincinnati and served as associate professor of Industrial Health in the College of Medicine for five years-where he continued his teaching and research. In 1964, he became full professor of civil engineering at Northwestern University, where he directed the academic programs in Health Physics and Industrial Hygiene, as he continues to do today. During his long and successful academic career, Herman has always loved to help his students. He has an informal teaching style and welcomes all kind of questions. In fact, the only question he does not like is will this be on the test? He has encouraged students to do what they enjoy because they enjoy it, not for the money, since one third of a person's lifetime will be spent at work.

He has produced more than seventy publications. His book, Introduction to Health Physics, has been used widely as a primary textbook in the radiological health field and has been translated into Russian and Chinese. In addition to all of the foregoing research and publishing activities, he has been an active participant in international organizations. He spent a year as a technical expert in occupational health at the International Labour Office in Geneva in 1961.

Herman is currently a professor emeritus of the Department of Civil Engineering in Northwestern University and a visiting professor of the School of Health Sciences at Purdue University. He has been chairperson of the HPS summer school and presented numerous PEP courses at the annual Health Physics Society meetings.

Today, the American Academy of Health Physics and American Board of Health Physics are proud to honor and recognize the dedication, excellence, and continued contributions to the research, practice, and advancement of the profession of health physics and the certification process. I take great pride and privilege in presenting the 2003 William A. McAdams Outstanding Service Award to Dr. Herman Cember.