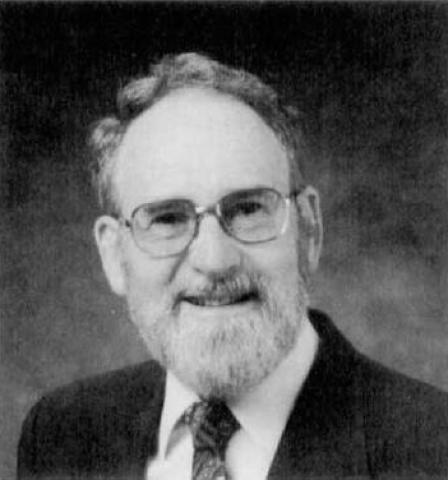 The American Board of Health Physics is proud to present the William A. McAdams Outstanding Service Award to Dale H. Denham. This award is given annually to a certified health physicist who has made significant contributions towards the advancement of professionalism in health physics and to the health physics certification process. The strength of the certification process relies on the professional strengths of the people who serve on the Board and Panels and on the clarity and consistency of its documentation. Dale has made significant contributions in each of these key areas.

Regarding documentation, we, as health physicists, have come to understand that in the eyes of the regulator, we are only as good as the records we keep. Dale applied this principle to the American Board of Health Physics, as he was the person who formatted and compiled the various memos, motions, minutes, and mechanics of the Panels of Examiners into the Board's Examination Panel Procedures Manual in 1985. This document implements the Board's Policy Manual and delineates how the examination is to be constructed to reflect the specifications of the professional practice of health physics. Dale also implemented the Board's direction and coordinated the development of the first serial multiple choice questions appearing on Part II of the comprehensive examination. Dale's legacy has recently paid dividends in that the Board's Procedures Manual was a key element in the recent application for accreditation of the professional certification in health physics by the Council of Engineering Scientific and Specialty Boards.

Dale actually began his service to the certification process in 1983, when he was appointed to the Comprehensive Panel of Examiners. That was during the time when there was also a Power Reactor Panel of Examiners, and the Part I examination was in the capable hands of Richard Bowers, 1991 recipient of the McAdams Award. Dale served as Vice-chairman in 1985 and as Chairman of the Comprehensive Panel of Examiners in 1986. Prior to Dale's tenure as Chair of the Comprehensive Panel of Examiners, each question on the Part II examinations was graded by only one person. Under Dale's gentle leadership, the Board recognized the inherent difficulty in assuring fairness with only one grader. In 1985, he helped coordinate the first multiple grading of Part II examinations, using a group of peers to review each candidate's response to each Part II examination question. Following Dale's lead, the concept of multiple graders for each question became a Board policy and grew from his original three to five, and now we are back to having three graders for each non-multiple choice question. Dale's legacy lives on.

Having "graduated" from the Panel of Examiners, he also served on the American Board of Health Physics during some of the formative years of the Academy, serving well as a member (1987) and in the offices of Parliamentarian (1988-1989) and Vice-Chairman (1990-1991). Dale has also served on Part I question development and validation panels. In more recent years, Dale has shared his wealth of professional experience, training, and knowledge of the examination process with others seeking certification in the practice of health physics. He has served as an instructor for examination preparation refresher courses offered by the Columbia Chapter of the Health Physics Society and for those courses offered by the Washington State University-Tri-Cities campus. From 1995 through 1996, he coordinated the examination preparation refresher courses for Washington State University-Tri-Cities.

Dale has a wealth of experience and training that he gladly and willingly shares with those seeking self-improvement. He started his career in health physics ably armed with a double major in mathematics and physics from Willamette University in Salem, Oregon, in 1960. He then went north as an AEC Health Physics Fellow at the University of Washington and Hanford Atomic Products Operation, receiving his M.S. degree in Radiological Sciences as part of the first class of such graduates from the University of Washington in 1962. Dale then proceeded south to Lawrence Radiation Laboratory (now Lawrence Livermore National Laboratory) where he provided health physics support for tritium, plutonium, and TRU facilities. It was at Lawrence Radiation Laboratory that he met his first office partner, Ron Kathren (current President of the American Academy of Health Physics and former President of the Health Physics Society).

Yet, Dale's roots were in the west. So he came back to Lawrence Radiation Laboratory as Supervisor of Radiological Assessments and eventually back to Hanford where he again worked for Battelle adding the broad areas of risk assessment, emergency response, and operational health physics to his growing list of capabilities.

He is now Manager of Radiological Measurements and Environmental Support for Bechtel Hanford, Inc., where he has developed the company's Price Anderson Amendments Act procedure for evaluating potential radiological noncompliances, as well as a simplified procedure for reporting radiological occurrences.

Dale's accomplishments are many and varied. The American Board of Health Physics certified him in the comprehensive practice of health physics in 1969. In addition to his contributions to the American Board of Health Physics and American Academy of Health Physics, he has written more than a dozen articles published in Health Physics and has contributed to over 75 technical reports on topics related to health physics. He has also made oral presentations at more than 50 national or international meetings. His professional contributions also include participation on the ANSI Standards Committee that formalized the Fissile Material symbol, development of the first Battelle Criticality Safety Manual, and participation on ASTM and NCRP subcommittees developing decommissioning guidance.