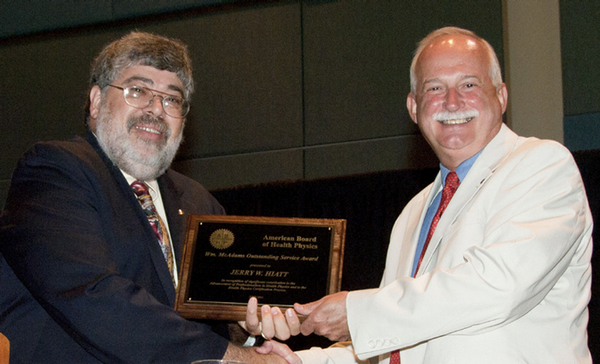 Being involved in a profession that revolves around atomic structure I thought I would discuss "string theory" a bit - but not that kind of string. The string I reference …

In 1973 a washed out pre-veterinary student saw a posting for new classes in radiobiology and health physics. I had the electives, there were no calculus pre-requisites involved, and I took them.

In 1975 I was hired at the Surry Station as a radiation safety technician - which I learned later was pretty unusual because they certainly had full access to ex-navy and shipyard health physics personnel.

In late 1976 I was hired by the Nuclear Regulatory Commission in their RIII Office and developed some long-lasting friendships in the field including Ted Borst and Nora Nicholson. I also had the benefit of working with Health Physicists like Ron Paul, Marty Schumacher, Stan Lasuk, and Harold Moe. Many of you know the last three as the authors of that wonderful reference book the "Argonne National Laboratory Radiation Safety Technician Training Course, or the "Moe Book." These gentlemen exuded not only technical knowledge but maintained an attitude & demeanor of professionalism that is a model for all of us.

In 1977 the greatest impact -- a beautiful southern lady, Liz Quesinberry, chose me as her husband from a multitude of possibilities and the string has been there throughout our relationship, even when living with me has been pretty darn challenging. One of the results is the three beautiful young ladies you see accompanying me today - Regan, Brittany, and Morgan. I certainly thank each of them and Liz for their patience through all of my traveling, their dedication to family, and their love.

In 1980 I was hired by Dick Bowers, then with NUS Corporation. Many of you know Dick and I am humbled when I think of his contributions and my inclusion on a list of individuals including him. Dick took the effort in assisting and mentoring me through, first, my certification and later his inclusion of me on the first Part 1 Exam Panel. He guided me into following him as Chair of the Panel. But he left a Panel that included Morgan Cox as Vice-Chair, Les Slayback, Bob Miltenberger, Shawn Googins, Kathy Shingleton, Gary Zeman, Paul Ziemer, Ed Maher and others. Maybe Dick felt that with that kind of Panel who could "screw it up."

In 1985 I joined Bartlett and I have been privileged to have the full support of first Bruce Bartlett, later Bill Nevelos, and now our current CEO, Bob Decensi. I think we all realize the absolute necessity of having sponsorship when we serve, and Bartlett & each Bartlett employee has contributed to my ability to work with the Board & Panels.

In 2004 I was elected to the Board where I was privileged to work with the Chairs John Serabian, Mary Birch, Jim Willison, Sean Googins, and Jim Tarpinian; all of the other Panel Members; and of course we were all kept in line on track by Nancy - my thanks to all of them for a lot of hard work but also a tremendous number of laughs.

Now - I mentioned these events as being part of my "string" theory because there were so many decisions I made & so many marvelous people placed in my life & I had no earthly idea of their significance. But these decisions and these marvelous people lead me in front of you today. Some people call this fate; some, karma; some, luck; Forest Gump called it destiny, but heading into the theological realm a bit, I have come to realize that the "string" is really the finger of God tracing a path through time for me and giving me the honor of working with and coming to know so many of you. I thank you for this honor and I thank God for leading us here.