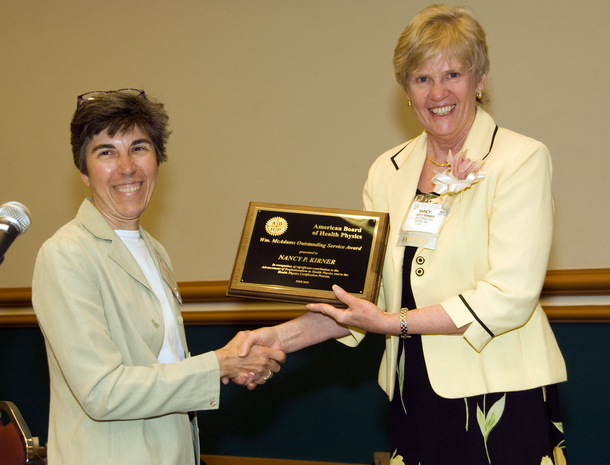 Thank you. It is truly humbling to be counted among the past McAdams awardees.

My family shares in this award, as do the many health physicists who helped me become and grow as a health physicist. None of us travel our paths alone. We are each given a certain set of talents from God, but it's the small every-day relationships with our countless associates, teachers, family, and friends that shape how we use those God-given gifts.

When I think about how I became involved with the American Board of Health Physics (back then the Academy had not yet been created), I think it all stemmed from chocolate pudding that my 5-month-old daughter, Katherine, somehow spread all over Ron Kathren's beautiful new silk necktie at a Columbia Chapter meeting in 1975. Maybe it was payback, but a few years after I became certified in 1978, I received a phone call from Ron asking if I'd be interested in serving on the Part II Panel of Examiners. I just said "yes," and then hoped that the others on the panel wouldn't find out that I really wasn't as smart as they must be.

What I found out was that hard work, determination, and commitment were what the Panel needed, just as much as smarts. I knew I could work just as hard as the next person, so I continued to say "yes" whenever the American Board of Health Physics and the American Academy of Health Physics asked for help. But, I was always juggling my work, family, and professional activities - and, I must admit, some jobs just didn't didn't get done as well as others. My family probably suffered a bit, but they helped tremendously. I remember when I was Part II Panel Chair and had to copy and collate test packages. The entire dining room, living room, and kitchen eating areas were covered with tests. Recognizing my plight, my husband, John, stepped in and took the children for a weekend-long hike in the mountains.

What I remember most, though, are the collegial relationships with other certified health physicists and with Nancy Johnson, our Program Manager. So, if you are ever asked if you would help on an AAHP Committee or an ABHP Panel or other task, I urge you to "Just say Yes". I can assure you, it will enrich your life beyond measure.

Thank you, again, for this honor.