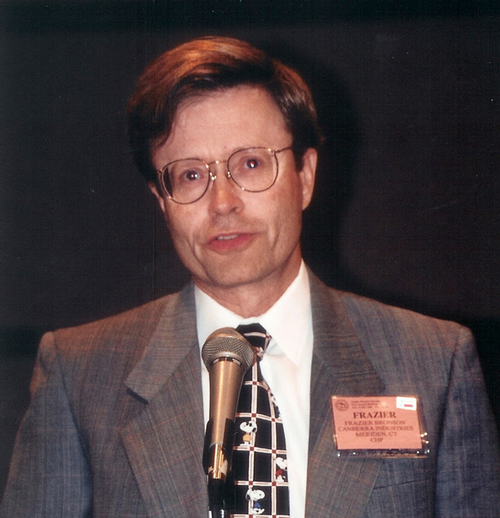 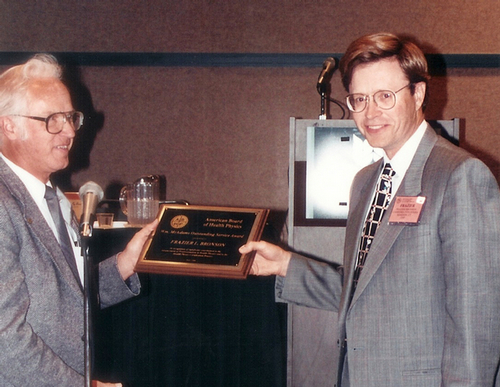 Thank you very much, Roger, for the very generous words in the citation. It is a very great honor to receive this award; it means a lot to me.

I find it very interesting that of the eight awardees, three of us started our careers at the same place and time. My good friends, Les Slaback and Lee Booth, and I were all at AFRRI together. Why did all of us become so heavily involved in the Board, the Panels, the Academy, and get this award? We know that it wasn't the water, since we had a very good environmental monitoring program. I know that in my case [and I suspect for Lee and Les] much of the reason for desiring Certification, and supporting the process, came from the influence of our boss, Sydney Porter, who always stressed the importance of sound HP judgment, a strong professional attitude, the importance of Certification and the HPS and participation in the process. Thanks, Syd.

It was Les Slaback that suggested to the Board that we create this award. I was honored to have been a part of that process, as the ABHP Chair at that time. Since this first award was to be presented at the 30th anniversary of the ABHP, we felt it appropriate to give the first award to one of the founding group. At that time, I was heavily involved in researching the ABHP archives, and I had many records from which we could get a good list of candidates. From these records, we knew who proposed, who discussed, and who signed the various documents. But we did not know the real creators, workers, or implementers. So, I wrote to each of the past Board members, and asked them who the real heart and soul of the early ABHP were. Most all responded with three names: Elda Anderson, Jack Healy, and Bill McAdams. But how to choose from this outstanding list?

I believe that it was Howard Dickson who came up with the brilliant solution. Elda Anderson already had a big award named after her, so she was out. So, give the award to one [Jack Healy], and name it after the other [Wm. McAdams]. I was also quite pleased in this selection, since as co-organizer [with John Horan] of the first ABHP Special Session at the HPS Meeting, the choice of Jack Healy gave us a candidate to fill in a Session time slot.

I really want to encourage all HPs to work toward becoming CHPs and want to encourage all CHPs to become active in the Board and/or Academy activities. Your will be greatly rewarded. Yes, it's also challenging, but it is very intellectually and professionally stimulating. Creating good exam questions is not easy. It takes much time, group interaction, and skill to create and refine a concept into a good and fair ABHP exam question [with correct answers] and then to assemble a select group of those questions into an exam.

I don't think I have ever been surrounded by such a capable group of people as during that time on the ABHP. I am tremendously impressed with the dedication of the panel members, particularly the Chair and Vice Chair of the Part II panel [and at that time the Power Reactor Panel]. Theirs is by far the most difficult job, as Roger well knows.

The Board is also very hard working and dedicated. During my five-year stint, we met two times per year, two to three long days each time. During that entire time, I don't think a single Board member was absent for a single day. All of the nice things that Roger put in the citation did indeed happen when I was there. But they are the result of the combined effort of nearly 40 people on the Board and Panels. I hope that I facilitated, rather than hindered the process. But overall, I was just lucky to be there, surrounded by many really good people, and it is in their honor that I accept the award.

Thank you very much.