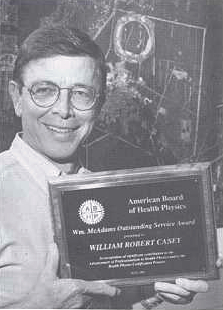 I thank the Board for this honor. Certification has always been an important issue to me. Receiving an award that recognizes my efforts in the certification program makes me feel proud and humble at the same time.

My participation with the Board's certification programs would not have been possible without the support and encouragement of many people. I particularly what to thank several CHPs who helped in big ways: Charles Meinhold always urged me to achieve certification, and onlce I accomplished it, asked me to work with him on the Part I exam. Wade Patterson asked me to join the Part II Panel of Examiners. Later, Roscoe Hall asked me to be Vice-Chair of the Panel of Examiners. I greatly value the role of each of these CHPs in my certification career.

When I started my professional career as a health physicist at Brookhaven National Laboratory in 1965, I recognized immediately that certification would be important for me ot achieve. I was often encouraged to become certified by the BNL health physicists, and it was clear to me that the plaque on the wall from the ABHP was valued at BNL. As a result, I wanted to achieve that same level of accomplishkment and distinction. I was very proud when I became a CHP in 1974.

My prior knowledge that I would receive this award at the Academy Open Meeting made me more aware than usual of the certification activities at the HPS Annual Meeting. As I walked to the opening session on Monday morning, I passed the room where a long line of health physicsts nervously awaited entrance to the exam. It made me remember my preparation and anticipation many years ago. Later that evening, we were joined at dinner by a young health physicist who had that Annual Meeting "Monday evening look." You know what I mean, the look of the person who had just completed the Part II exam - trained, tired, and slightly disoriented. I talked with him and asked for his opinion of the exam and his views about how he did. His answers were the same that I often hear: The exam was hard; it was long. He thought he had done okay, but he wouldn't be surprised if he failed. He thought the exam was fair. He noted that if he didn't pass, he would take it again next year. He said that the CHP was more important to his career than the PhD he was also working on.

Do you find that attitude as important as I do? Are you amazed that more than 35 years after the certification program was started that more people than ever are lining up to take the exam? Can you think of any program that has contributed more to the elevation of the practice of health physics than certification? Every person that I have ever talked to about the exam has stated that they were a better health physicist as a results of preparing for the exam. And it is true!

Why do people line up for that exam? I believe they do because the title CHP has been recognized by many individuals and organizations as a title of considerable value. A CHP has demonstrated a substantial knowledge of health physics. The body of work performed by CHPs has been recognized as highly competent and credible. These factors create greater opportunities for CHPs and high respect from the health physics community in general. Yet, the perceived value of being a CHP is due to the individual actions of each CHP.

Each of us is now a keeper of the same flame that sparked you and me to seek certification and continues to spark health physicists today. It is up to each of us to keep the flame alive for the future. Never take for granted the effort and the responsibility that this nurturing requires.

There are several elements in this responsibility that we should keep in mind:

Years ago I fell into the health physics profession because of a graduate fellowship that was offered me. I wasn't sure what a health physicist was, and I didn't really know if it was a career that I would enjoy; but it sure seemed to beat the unemployment line. What a fortunate bit of serendipity for me! I am thankful for what my career has brought me, and I look forward to what it will bring me in the future. I specifically look forward to continued involvement with the ABHP and the AAHP.

Thank you again for this wonderful honor.