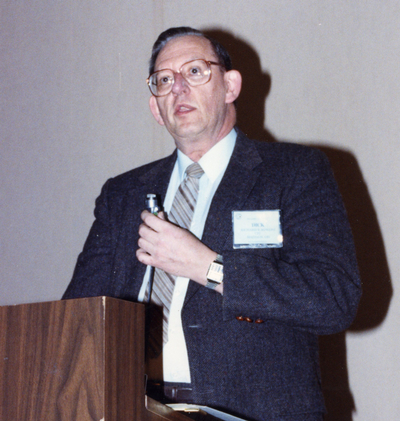 I have worked with the Board for about 17 years. The working relationship, although it has taken a significant commitment of personal time, has been something I have enjoyed. There are three major reasons why I have found this association to be rewarding.

First, are the people. I have gotten to know and become friends with many people whom I would not have met otherwise. I have had the help of a large number of people. I originally thought I would acknowledge those people who have given me significant assistance. When I started my list, it became so large that it became apparent it would be inappropriate to take so much time. I also realized I might accidentally leave out a few people. Rather than risk such an oversight, I decided not to list names. Those of you who have been so supportive over the years know who you are. Thank you for your help.

Second, is the gain of knowledge. Just by associating with the various experts on panels and the Board, I have at least tripled my technical knowledge in Health Physics. It has always amazed me how much knowledge is present in these relatively small groups of people.

Third, and probably the most important, is the feeling of contributing to something very worthwhile. During the 17 years, I have attended all but about four Board meetings - first as a Panel member, then as a Panel chair, and finally as a Board member. One of the reasons I have been willing to put forth the effort required over these years is that early-on I saw how extremely objective the Board's actions are. They have consistently bent over backwards to give candidates the benefit of any close call. I have never seen any hint of any preferential treatment of one person over another. All decisions are made based on the facts available, and with the most professional candor I have ever witnessed in any group I have been a part of. This is the type of group I am pleased to have been associated with.

The Board members take their responsibilities seriously. This very professional approach to business can only make Certification more meaningful. Certification to me is one of the best things professional Health Physicists (whether certified or not) have going forf them. We must try to get more people involved in the Certification process.

This award is very meaningful to me. It is definitely one of the highlights of my career.

Thank you very much.